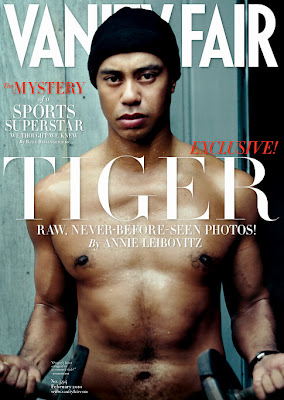 This monthâ€™s cover of Vanity Fair with the CHEETAH on it made his whole situation worse. The timing of this cover couldnâ€™t have been any poorer, not to mention that I honestly am not used to seeing Tiger look like this. He definitely should have gone with a button up collar shirt, argyle sweater vest, khakiâ€™s and some nice shoes. Yes, the preppy look because this thugged out look isnâ€™t working for him. Not a good look Tiger!


First and foremost Iâ€™d like to say that this whole Tiger Woods scandal/ controversy are so yesterdayâ€™s news. Yes, like the kitty litter! I am so tired of hearing about this on so many levels. I didnâ€™t even care to hear his public apology because first and foremost he invited who he wanted to invite to the press conference and secondly he just issued a statement not, wanting to deal with the mediaâ€™s questions. So, why set up a press conference in the first place? He could have issued that apology from his personal webcam live from the privacy of his home and called it a day! (Or something along those lines) I also donâ€™t believe he owes the world an explanation for his indiscretions. After all it is between him and Elin. I believe that everyone is entitled to their privacy but, when you are a high profile celebrity you kind of forfeit that because of your social status. Needless to say, all his skeletons went flying out his closet and now heâ€™s trying to get them back where they belong, 6ft. under the ground. Now all his business is publicized and itâ€™s an addiction!


I am driven to believe that his public apology wasnâ€™t sincere. After reading all the articles and tweets about this situation, I broke down and watched Tigerâ€™s apology. The first thing I noticed was that he was reading from a sheet of paper. Ummâ€¦ Why do you have to read an apology that should be coming genuinely from your heart from paper? I mean couldnâ€™t you have had your publicist get a teleprompter for you so that youâ€™d look like you actually were sorry? Bottom line was him asking the media to stop stalking his family that he acknowledged his mistakes, and is now getting help, heâ€™s sorry to his family, friends, and business partners and last but not least there was no domestic dispute between him and Elin. Whatever! Women are emotional, we get hurt and react. We may not even realize what weâ€™ve done depending on the severity of the situation until itâ€™s over. We are entitled to our â€œWaiting to Exhale Momentsâ€ when we are mad as hell! So, if she did go after him with the golf club and bust the windows out of the Escaladeâ€¦ She was blowing off steam! Iâ€™m not saying that it makes it right, Iâ€™m just saying that if she was reacting emotionally to finding out her husband was unfaithful well, Iâ€™m not surprised.


Men have been cheating for decades and we need to realize that nothing has really changed with times accept they try to get sneakier at doing it and theyâ€™re so dumb they get caught anyway! It can be as simple as using a credit card to pay for a hotel room, lipstick on the collar, Iâ€™m working late excuse and letâ€™s not forget the infamous cell phone drama! New age Social Networking has made it even worse with LinkedIn, Facebook, MySpace ect. Can you believe Lawyers are using Facebook messages in divorce court as evidence! I know that men get stuck on stupid when they have an erection but, I canâ€™t imagine all the blood from the BIG, BIG, BIG head going into the little, little, little head so there must be some left over in the big head right? I mean seriously! This statement doesnâ€™t exclude women either. Women do cheat as well but, men do it a lot more and this isnâ€™t about us todayâ€¦


Random thought… this cheating gene that they are talking about is a bunch of B.S. to me. This will definitely be explored and challenged in a later post. All in all, I hope that Tiger does what he needs to in order to salvage his marriage and maintain his family. At the end of the day heâ€™s a role model, international sports figure, celebrity in his own right and a business man but, you take that all away and heâ€™s still a human being just like the rest of us.