Today I join in with other bloggers around the world to unite and blog for a great cause. We are fighting for preemies today and advocating awareness of the crisis of premature birth along with the March of Dimes. Every year, 20 million babies are born too soon, too small and very sick â€• half a million of them in the United States. There is no particular reason and we would like to get answers and gain preventative measures to keep this from happening.

Here is my personal story of a miracle baby that entered my life, my god daughter Sydney. We all were ecstatic to find out that we (actually my best friend Jenee and her dear hubby) were having a baby. Her due date was estimated at July 3, 2009. We were expecting an Independence Day baby. Well, things didnâ€™t quite work out that way! On the morning of April 5th, 2009 Jenee started cramping. She called the doctor line and they told her it was more than likely dehydration. She tried to hang in there and consume liquid but, the cramping wouldnâ€™t stop. The cramping got worse as the day went on. She called her doctor around 3p.m.and they told her to come in so that she could be checked. She went to Labor & Delivery at her hospital and was hooked up to the fetal monitors. It was soon determined that she was having contractions and was in active labor.

I got a text message that night sayingâ€ Iâ€™m in the hospital with contractions. They canâ€™t get them to stop. I donâ€™t think Iâ€™m going home tonight!â€ I immediately went into panic mode. Iâ€™m eight hours away In North Carolina and sheâ€™s in New York. I felt helpless. All I could do was pray and hope for the best. There were several attempts to try and stop the contractions but, hours went by and she was progressing. At 8 a.m. her water broke naturally and there was no stopping Sydney from coming at this point. They induced her labor to help her along by giving her some pitocin for about an hour and Sydney blessed us with her presence at 12:21a.m. On April 6th, 2009 weighing a mere 2lbs. 2oz. and 14 inches long after just 27 weeks gestation.

She was immediately taken to the NICU (Newborn Intensive Care Unit) where she was intubated, all her stats were taken and she was placed in her isolette which would be home for the next few months. The first 24-48 hours are critical and we all got on our knees and started praying. All I could do is panic at this point because I wasnâ€™t there for my best friend and I just couldnâ€™t imagine all of the emotion that she must be filled with. This was her first baby and I felt a sense of guilt for not being there for her. Now all we could do was waitâ€¦

Sydney was a trooper. Sheâ€™s was fighting everyday to become stronger and face her obstacles. She was jaundice and had to undergo photo therapy lights for a week. In addition to that she had to be placed on CPAP for longer than usual she stayed on it for thirty days for her breathing, due to her lung immaturity. A feeding tube was placed so she could receive nutrition; she had a heart murmur, a grade 1 brain bleed and suffered from Apnea (she would forget to breathe) & Bradycardia (her heart rate would drop). Mom finally got to hold her for he first time after eleven days and after seven weeks she was able to begin trying to nurse her.

As time went on Sydney did start packing on pounds, and got stronger but was still struggling with breathing on her own. She also had reflux which would cause choking episodes, so you had to stay very close by at all times. The team that cared for Sydney was great! She was in a facility that was able to handle all of her care and was able to handle any emergency that may arise. She was tended to at all times and they were very accommodating to Jenee and her husband by keeping them well informed about what was going on with their little miracle.

After months in the NICU on June 15, 2009 Sydney was released from the hospital only to return two days later due to reflux and choking. She was readmitted and stayed an additional ten days in the hospital under observation and they put her on medication to help with the reflux. She was also still learning to suck, swallow and breathe properly. On June 27th Sydney was released from the NICU for a second time and sheâ€™s doing well. Sydney is now seven months old and receiving early intervention Physical Therapy, Occupational Therapy and Speech Therapy to help her develop, she is very bright and I just love to listen to her coo over the phone and laugh. She is truly a blessing and I love her to pieces! 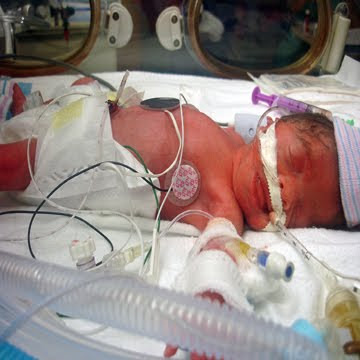 For more information on Preemies and /or to donate go to: http://www.marchofdimes.com/fightforpreemies